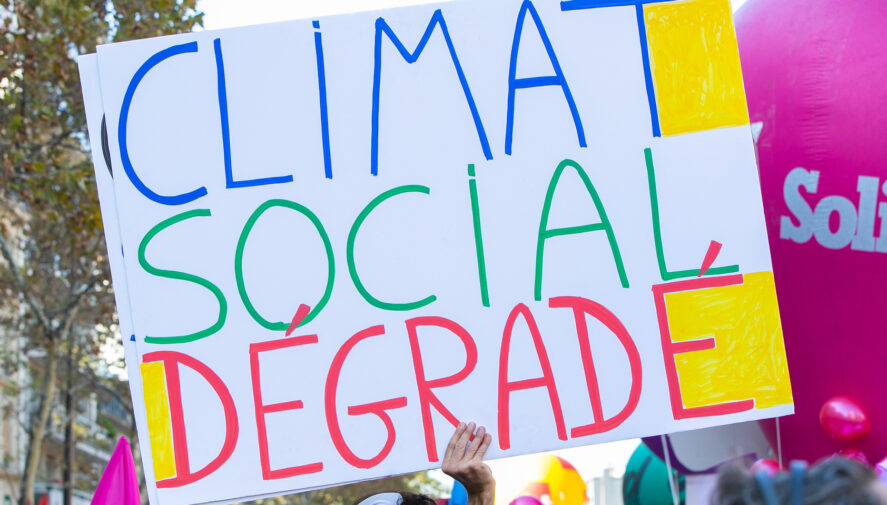 France: The working class strikes back

WITH a successful day of action on October 9, the major trade unions, CGT, FO, Solidaires, FSU, which organise the most combative sectors of the French working class, have shown that they are still a force to be reckoned with. In Paris, the demonstration was tens of thousands strong, with lively contingents from most of the public sector, especially from health workers and teachers.

Dozens of demonstrations took place across the country. While the “manifestation de la rentrée”, the return to work demo, is a French tradition, in recent years, especially under François Hollande’s presidency, the mobilisations were fewer in number and smaller. The success of this year’s demo, despite its lack of any central focus apart from the vague slogan “against the politics of destruction of our social model”, illustrates the new mood in the class struggle in France. It was essentially a demonstration of defiance and hostility against President Emmanuel Macron and his plans for further attacks. Several fight-backs in the private sector also confirm that Macron has not been able to break the combativity of the working class.

One year after his meteoric rise, Macron has run into his first real difficulties. The media have focused on the “affaire Benalla”, from the name of his young aide who violently attacked two demonstrators on Mayday. In reality, the French police have committed many more assaults and crimes that went unnoticed. Since the 2015 terror events, the normal police are heavily armed and have a tacit “licence to open fire”, especially in poor immigrant areas. Even more vicious are their actions against migrants, both in the Calais region and around the Italian frontier, such as destroying their tents or taking their shoes and abandoning them in out of the way locations. Or, in the words of one journalist, “agents of the French Republic beat, gas, throw stones, bully, humiliate adolescents, young women and young men in distress and destitution”.

To return to Macron’s woes, the “affaire Benalla” is just another example of the highly personalist use of the state power by the “Jupiterian” President but it is in no way the main reason for his loss of popularity. Indeed, many people rapidly realised that many of his election promises were utter lies. What has made him particularly unpopular were his attacks against pensioners, now more heavily taxed and, at the same time, his generous give-aways to the wealthy and the bosses. Many now call him “Président des riches”, the president of rich.

Two major reforms of his government met with fierce opposition earlier this year. One was the “reform” of the public rail company SNCF, which was in fact preparation for privatisation and attacking the rights of rail workers. The second was a reform to university admission, preparing a stricter selection process for students. SNCF workers, traditionally a vanguard of the French working class, resisted with a three month long strike. While the strike was defeated, in the sense that the reform was passed by Parliament, many workers beyond SNCF supported the railway strike and the defence of the public service was broadly supported by the population, despite the delays and the practical problems it posed to the lives of millions. Somehow, although he won this battle, it might prove a Pyrrhic victory for Macron.

At the same time, students occupied several key universities, including one in central Paris, encouraging self-organisation by holding lively general assemblies and taking steps toward joining forces with the railway workers. These two battles took a heavy toll on Macron’s approval ratings and go a long way to explaining his present difficulties. Moreover, as he has no real organised party behind him, but simply a bunch of inept newcomers to politics, he does not have real roots in society. He clumsily tried to appear close to the ordinary people via walkabouts to discuss their problems but this too backfired. In a widely reported and revealing exchange, he rudely replied to one young unemployed person, “Just cross the street and you will find a job”.

Now, some key ministers like Nicolas Hulot, a well known figure of bourgeois “ecology” or Gérard Collomb, the most important ex-PS leader supporting Macron, have left the government, like rats leave a sinking ship. Frantically trying to replace Collomb, Macron’s offer was rejected by five more people. In the next few months, he is planning a further round of attacks, this time “reforms” to both unemployment benefits and pensions. These include a new pension scheme which will raise the retirement age by one year while lowering pensions for less well paid workers. However, he will launch these from a weaker position, the demonstrations of early October have shown that he could face yet more resistance.

In the meantime, most parties are preparing for the next big political event, the May 2019 European elections. These take place using proportional representation, rather than the French two-round system, and, because the European parliament is mainly a symbolic assembly without any real power, most people in the past voted according to their sympathies. Ominously, at the last such election, the National Rally, as the National Front is now called, came out as the number one political party. Indeed, right across Europe, notably in Italy, reactionary populist forces are preparing to capitalise on the generalised discontent.

On the French left, the situation is quite confused and this represents a major weakness for the French working class. After five years of his alliance with the Communist Party, PCF, in the Left Front, the Front de Gauche, Jean-Luc Mélenchon of France Insoumise, Unsubmissive France, has openly split with them. His aim is to regroup the reformist left under his banner, in a mix of populism and national chauvinism.

His incredible egotism is on display in an online video shot when his party headquarters were searched by the police. He exclaims “Hands off me, my person is sacred, I am a member of parliament!” Hurriedly donning his tricolor sash, he adds, “La République c’est moi! I am the Republic.”

However, his party is not really picking up much support even though his group of MPs was recently reinforced by another split from the disintegrating Socialist Party.

In a recent debate on immigration, Mélenchon appeared on the defensive. A spokesperson of France Insoumise claimed that there is a need for the left to think how to “limit or to stop immigration”, before being disavowed by their own party. This is certainly on the same line as Mélenchon, who never defended a “no-borders” line, and prefers to “help migrants in their own countries”. However, this line is not well accepted even among Mélenchon’s supporters and the PCF openly attacked his stance.

The New Anticapitalist Party, NPA, could possibly make gains from this confusion on the reformist left. There are some signs that it is attracting new layers of youth and has a lot of sympathy in the working class. However, its lack of a clear independent action programme to defeat Macron by mass working class action, up to and including an all out general strike, is a major weakness.

Instead there are deep divisions within its leadership, with one strong component wanting to orient toward Mélenchon’s populism and another towards the PCF. Nonetheless, if the party clarifies its politics and puts itself at the forefront of the anti-Macron struggles by workers, pensioners and youth, it could continue to attract new members and even make a real breakthrough.