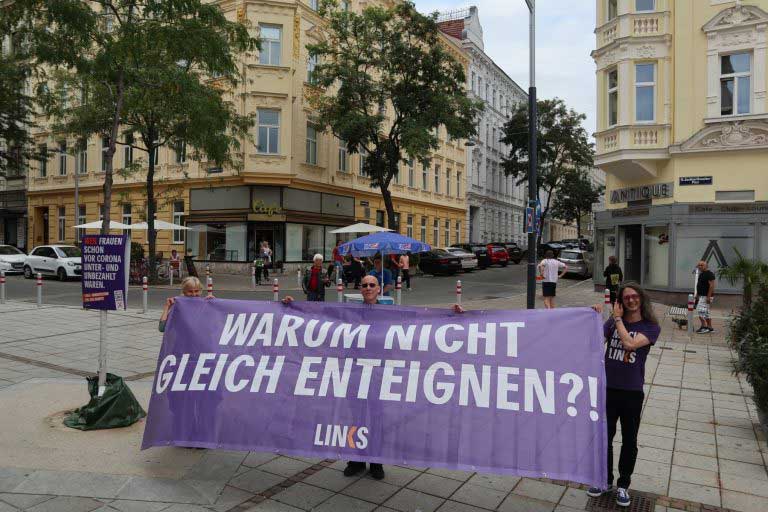 Austria: Local elections in Vienna and a new Left organisation

By Workers’ Standpoint, Austrian section of the League for the Fifth International

In the recent local elections in Vienna, the biggest city in Austria with about one third of the country’s population, our Austrian section was part of a new left election project called LINKS (German for “left”). These elections, although only regional, are comparatively important not only because of the size of Vienna’s population but also because it is the last major stronghold of the Social Democratic Party of Austria (SPÖ) which has held the mayoral office for the last 75 years.

Elections
Thematically, the elections were quite strongly influenced by the Corona pandemic. The right populist Freedom Party, FPÖ, argued that small businesses were harassed by excessive measures while the neoliberal New Austria and Liberal Forum, NEOS, demanded more support for them. However, the issue of the economic crisis was not mentioned as much in the election campaign, especially regarding the working class and its situation. A wave of mass layoffs by large corporations is already sweeping the country, but the established parties have no real solutions to offer. This problem is likely to increase in intensity in the coming weeks and months.

Important topics like the right to vote for all people living in Vienna, around one third of the Viennese population does not have the right to vote because it is very difficult to get citizenship, were only politically discussed because of strong campaigning by LINKS. The SPÖ under Michael Ludwig positioned itself clearly here: according to him, the right to vote should be reserved for those with citizenship and thus a large part of the working class should continue to be excluded from the right to vote. The Greens, who are in a coalition government with the conservative Austrian People’s Party (ÖVP), showed their true colours when they voted against evacuating even a single refugee from the Greek island of Lesbos when the main refugee camp “Moria” burned down.

Results
The dominant feature of the election was the dramatic decline in the numbers voting. While the pandemic undoubtedly played a role in this, a scandal that split the FPÖ last year also had an impact. In percentage terms, the FPÖ only gained 7.1 percent, a loss of 23.7 percent, while “Team Strache” led by the former leader of the FPÖ, picked up 3.6 percent. This clearly benefited the ÖVP whose vote went up by 11.2 percent to 20.4 percent. The Greens, currently in coalition with the ÖVP at the national level, got 14.8 percent, an increase of 3 percent and the NEOS 7.5 percent, up 1.3 percent.

The undoubted winner was the SPÖ which increased its percentage by 2.0 to 41.6 percent, the first such increase since 2005. Nonetheless, its actual votes went down from 330,000 to 302,000 so, despite its victory, the overall long-term decline of the party continues. The party that lost the most, however, was the right wing FPÖ: Of the 257,000 voters in 2015, one hundred thousand stayed at home and another hundred thousand were distributed mainly among ÖVP and the breakaway party under their former leader HC Strache.

Overall, the most right-wing parties (FPÖ, ÖVP and HC) had their share of the vote reduced from a total of 40 percent in the last elections to just over 30 percent this year. The main reason for this was the “Ibiza affair” which brought down the ÖVP-FPÖ government and resulted in the split of the FPÖ. At this point, it should also be mentioned that the SPÖ, with its rejection of voting rights for everyone living in Vienna and its reluctance to counter right-wing demands for further restrictions on social housing for non-citizens, tried to attract votes from former FPÖ supporters but without much success.

LINKS
The electoral project LINKS, founded in January, won 2.06 percent in the municipal council in alliance with the Communist Party, KPÖ, and over 5 percent in individual district councils. It has thus doubled the result of the KPÖ-led “Wien andas” alliance of 2015. Although it did not manage to enter the city council, it will have 23 district councillors. This is a solid result for its grassroots election campaign, in which LINKS moved slightly towards more openly anti-capitalist and class struggle politics.

At the same time, the result should not be overestimated, it is only a first step, there is still a long way to go. The political profile of LINKS does represent a clear break with SPÖ reformism and Green politics, but the question must also be answered what the goal beyond capitalism actually is and how we can get there. If it is possible to continue the positive development and to build on the successes, LINKS can be the starting point for building a new workers’ party in Austria. For this reason, activists of the Austrian section of the LFI have been involved in LINKS since its foundation.

A move to the left
The election campaign has shifted LINKS to the left and brought about a more radical, albeit not openly anti-capitalist, profile. An important moment was the demand for expropriation of the super-rich raised by top candidate Anna Svec in a TV interview. The demand for expropriation was later used repeatedly by activists using practical examples such as the largest Austrian oil company, OMV, companies making mass redundancies, the super-rich. Closely linked to the demand was the call for redistribution, guaranteed income for all the unemployed or underemployed, a reduction in working hours and a minimum wage of € 1,950. There was also the demand that vacant housing should be allocated according to social criteria, which is a clear attack on the power of private real estate property.

Although the strongly emphasised right to vote for all was not clearly formulated from a class perspective, it is an important approach to the political mobilisation of politically excluded sections of the working class. Where LINKS mobilised city-wide, these very progressive demands and solidarity with the social movements were in the foreground. In the later election campaign, the exploitation of workers and unpaid domestic work was also identified as a cause of inequality.

Capitalism and socialism, however, were not named, nor was the working class or, apart from an action against mass redundancies, the class struggle. Typically for new and non-revolutionary anti-capitalist organisations these questions were not named explicitly. This, however, is necessary to make the class position clearly understandable and to declare an open attack against the reformist leadership of the workers’ movement and its class collaboration.

Building a socialist workers’ party
In February 2020, the Arbeiter*innenstandpunkt published an article “Election Project LINKS: What kind of organisation do we need?” In it, the section welcomed the joint election campaign and the clear goal of building a new left-wing organisation. At the same time, it emphasised the importance of the programmatic process and the reference to the struggles of the working class, in both economic and social questions: “Just like we can understand, for example, sexist and sexual oppression only in connection with capitalism, we can only lead an effective struggle against it with an all-round political class struggle.”

The assessment that LINKS can be capable of this has proved to be correct. The very young organisation has managed to achieve a high level of activity and good positions on almost all the important issues, despite corona restrictions and all other (expected) obstacles. In the programmatic process, they committed themselves to class struggle and a revolutionary break with capitalism, the most common demand in the election campaign was the expropriation of super-rich and large corporations.

The activists of LINKS have done a great job and, at the same time, have had substantive political debates that are needed. Marxists and class struggle activists must take their place side by side with these comrades, build this organisation together with them, have the necessary discussions and draw the necessary conclusions. If this succeeds, the electoral success of LINKS will be an important step in building a revolutionary workers’ party in Austria. 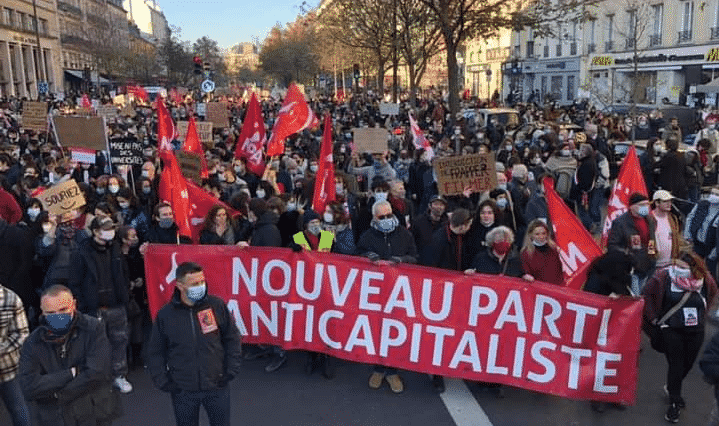 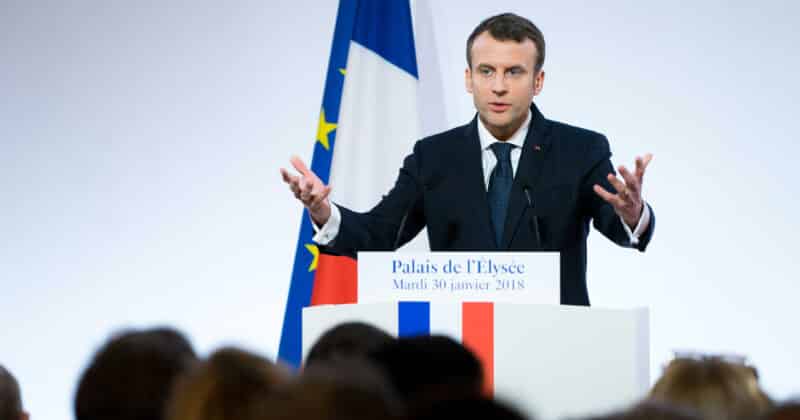 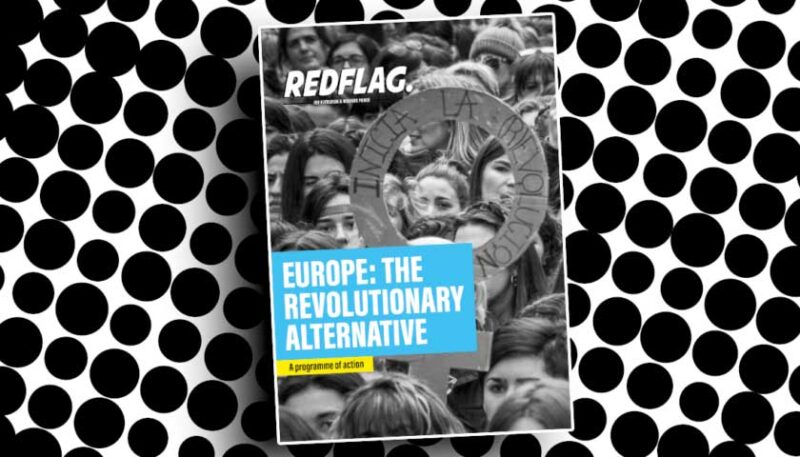