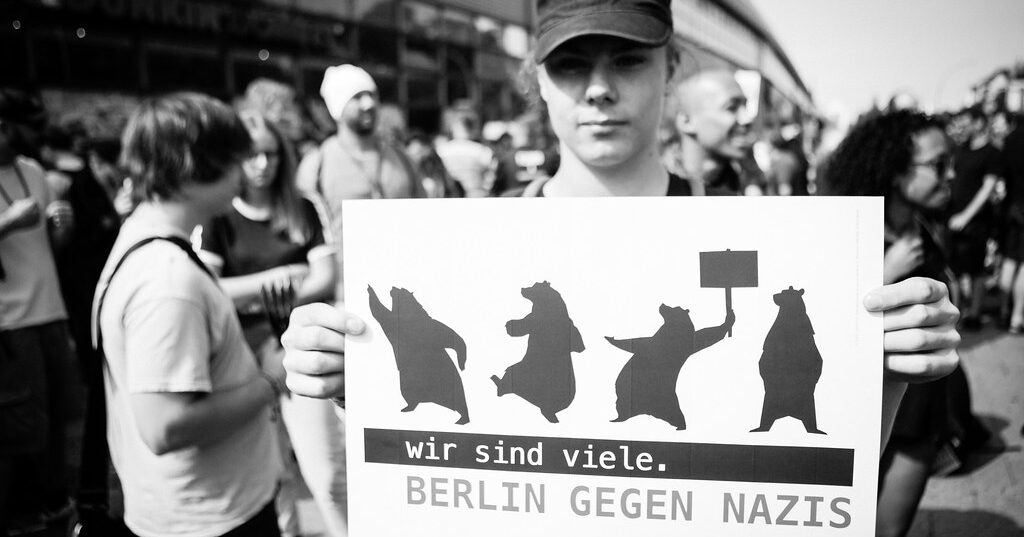 On 7 December 3,000 police officers and special forces raided premises and arrested 50 people in an operation targeting the ‘Patriotic Union’, in the largest anti-terror operation in the German Federal Republic’s history.

The stated aim of this group of conspirators is that of the thousands-strong Reichsbürger (Citizens of the Reich) Movement: the overthrow of the ‘illegitimate’ Federal Republic and the establishment of a ‘transitional government’, aiming to restore the German Reich to its 1871 borders.

The ideology of these conspirators centres on the superiority of the German race to others, and that it has been subjected to a cunning international conspiracy of its national enemies (Jews, international financiers, liberals, gender activists etc.)

Their mindset is reminiscent of those in the USA, like the Oath Keepers and Proud Boys who stormed the Capitol on 6 January 2021. Conspiracy theories including QAnon also inspired quite a few members of the group’s ‘shadow cabinet’. For years they have spread the fantasy that the First World War was the result of a conspiracy of Freemasons and Jews and that the German monarchy therefore still exists, with the Federal Republic an illegitimate creation of the Allies and ‘world Jewry’.

One of their most high profile members is former Alternative for Deutschland (AfD) member of the Bundestag and judge Birgit Malsack-Winkemann, the group’s ‘shadow’ Minister of the Interior. She has been agitating against migrants and refugees for years and has further radicalised herself with the so called ‘lateral thinkers’, and reactionary anti-vaccination activists.

It is not yet clear how far the plans for an armed coup really went. There is little doubt that they had gone beyond the stage of general declarations of intent and wishful thinking. It apparently included plans to kidnap the Minister of Health and ‘neutralise’, i.e. murder, his personal security detail. With the ‘Patriotic Union’, a right-wing terrorist conspiracy was formed which had not existed in this form in Germany for decades. This alone proves a radicalisation process that goes far beyond this grouping.

However obscure the organisation may be as individuals, they represent the alienation of much broader petty-bourgeois and middle class strata from the political system. The economic, social and political crises since 2008 have undermined their social position. Out of this grows the fantasy of a conspiracy for the ‘repopulation’ of Germany by immigrants, to the ‘bleeding out’ of Germany’s wealth by the Euro and the EU, to ‘vaccination’ aimed at sterilising the ‘white race’, the subjugation of the country by the USA and a ‘Jewish world conspiracy’, in the service of which gender transitioning, feminism, anti-racism, cosmopolitanism, etc. serve as preparation.

It is no coincidence that the AfD voters are over-represented amongst the police force, or that right wing activities are on the rise amongst soldiers and staff in the Bundeswehr. But that the officer corps, professional soldiers, and police forces are turning to the right at a quicker pace than average citizens is a symptom of the rapid rearmament, in which the army is being prepared for intensified imperialist interventions.

The ‘Patriotic Union’ cannot simply be played down as a troupe of clowns. Rather it is a warning of what is yet to come in a period of economic crisis and war in Ukraine, and conflict between the imperialist powers.

Turning to bourgeois democracy—and certainly not to its police or prosecutors—will not help us in the struggle against a right-wing danger. What is necessary is that the left, the trade unions, all parties of the workers’ movement break with this policy of subordination to capital and together take up the struggle against crisis, environmental destruction and war, in order to deprive the right of its social breeding ground.