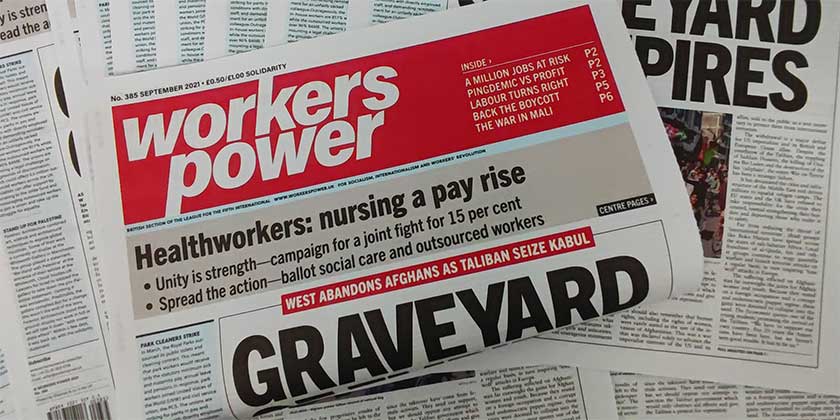 Why we are relaunching Workers Power

WORKERS POWER is resuming publication after six years – replacing Red Flag which was the name of our website, magazine, and organisation during the four and a half years of Jeremy Corbyn’s leadership of the Labour Party and the first 18 months of Keir Starmer’s.

In 2015 Jeremy Corbyn appealed to all socialists to join or re-join the Labour party. Our members did this along with hundreds of thousands of others, helping to make it the largest left party in Europe. In this period, Labour challenged austerity and criticised the pro-market and militarist legacy of Tony Blair’s New Labour.

Within Labour, we fought to democratise the party, helped lead the fight for an internationalist alternative to Brexit, organised anti-racist and anti-fascist mobilisations, and were actively involved in a wide range of local initiatives and campaigns.

But Corbyn’s leadership, won almost by accident, was hemmed in by the fact that a huge majority of the Parliamentary Labour Party was hostile to him, as were most local councils and the party bureaucracy. Corbyn and his lieutenant John McDonnell from the outset made it clear that they would not seriously challenge the disloyal MPs or councillors.

At the same time no lasting reforms to democratise the party were installed. They feared a split which would doom the prospect of Corbyn government. Like the Labour left in the last hundred years they believed that Labour had to be a broad church, forgetting that if the right do not occupy the pulpit they will try and wreck the party.

This is because the right’s loyalty is not to the party, let alone the working class, but rather to its enemy: the Establishment and the capitalist class. Corbyn’s internationalism and support for Palestinian resistance to Israel’s attempt to destroy them as a nation meant he had no hope of a security clearance and would never have been allowed to become prime minister.

So although the Corbyn left within the party and the trade unions was probably even bigger than in the 1980s or ’50s, it was atomised, without its own leadership above the local level, and paralysed when the right counterattacked.

Under Keir Starmer, the party has lurched to the right, and hundreds of thousands have left, while thousands more are being purged.The Left MPs (the Socialist Campaign Group) as measured by those who dared protest the expulsion of Ken Loach, is down to 15, about where it was before 2015. Soon, if not already, most of the Corbyn left will be outside the party.

What we fight for

For those on the front lines of struggles against climate change, poverty, and the pandemic, the battle inside the Labour Party is no longer the central issue of the day.

On the contrary, socialists must turn to the social movements like Black Lives Matter, Extinction Rebellion and Kill the Bill to provide practical support and offer political leadership. We must connect with the rank and file base of the unions, whose members face imminent threats of job losses, pay cuts and casualisation and whose leaders offer only compromise and sell-outs.

In doing so we want to re-emphasise our own revolutionary tradition as Workers Power, which goes back to 1975. While we never abandoned this tradition, embodied in manifestos, resolutions, and major articles, as well as on the ground in the miners’ strike, against the Iraq war and elsewhere, we want to make that connection as visible as possible.

We also want to underline that we are part of a global tendency, the League for the Fifth International, with sections in Europe, Asia, and the Americas, several of them called Workers Power in their own languages.

We do not claim they are parties but rather fighting propaganda groups, whose main purpose is to develop and argue for the strategy needed for victory in both national and international class struggles. At the same time our task is to participate in the fighting organisations that the working class has created, working to create new revolutionary parties and a Fifth international.

If you are an internationalist and a class-conscious fighter against capitalism, join the fight for workers’ power today.