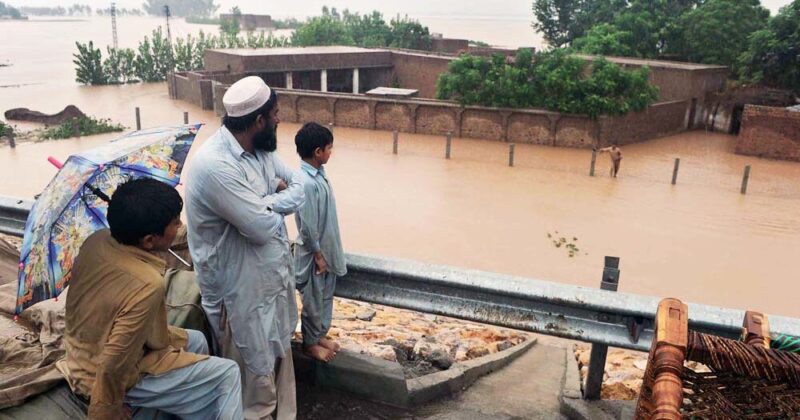 According to official estimates, the floods hitting Pakistan have already led to almost 1,300 deaths, over a third of them children. A third of the country’s provinces have declared a flood emergency.

This year’s monsoon in Pakistan has proved to be unusually long and destructive. In Sindh, Balochistan, Khyber Pakhtunkhwa, Gilgit-Baltistan and South Punjab, millions of houses have been destroyed and millions of cattle killed.

Bridges and roads have been washed away; inter-provincial and internal routes have been destroyed. The power system has also been damaged and disrupted.

People in those regions have nothing to eat and are starving. Drinking water is also not available for the labourers and the poor. Diarrhoea, skin diseases and eye infections are rife, but there is no functioning healthcare system.

The state is not providing any help and assistance to the common people, even those engaged in relief activities. Yet only regional and central governments have the funds, resources and technical equipment to alleviate the humanitarian disaster.

Pakistan contributes about 1% of the world’s greenhouse gas emissions, yet it feels the effects of global warming more than almost anywhere else.

The glaciers in the northern region are so enormous that they are sometimes referred to as the ‘third pole’. They are melting at a record rate, filling the rivers even before the monsoon rains. Then the rising sea temperatures mean more water evaporates so the monsoon is even more destructive than ever.

This much is widely reported in the west. Less widely acknowledged is the fact that the advanced western capitalist countries contributed the lion’s share to global warming. To do so would be to open up the governments of the US, UK and EU to the demand for reparations for the damage done.

Even less well known are the other contributing factors in which Pakistani capitalism has colluded with the imperialists to condemn the poorest to bear the brunt of the devastation.

Scandalously in southern Punjab and Sindh, the flood was diverted to the villages in order to protect the property of landlords and rich capitalists. Instead of investing in flood protection, the state channels some 2,700 billion rupees ($12 billion) into the pockets of the big capitalists every year.

The provincial government of Sindh has completely failed to take measures to protect the citizens from extraordinary losses due to these rains, despite the advance notice. Rather, the Pakistan People’s Party-led government has worked in the interest of Malik Riaz and other capitalists and big landowners. Their factories and large plantations were protected, instead of the mass of the population.

In Balochistan, the catastrophe has been developing for more than a month, and water management practices have exacerbated the disaster. Dams and various other constructions and settlements have been built in places that have affected the natural flow of rainwater. As a result, roads that are essential to any relief effort have been inundated.

When the floods only affected the countryside and villages, they were ignored. Only now that floods have engulfed the city of Quetta and begun to spread to other provinces, threatening the profits of the capitalists, has the ruling class begun to acknowledge the problem.

The situation in Pakhtunkhwa, in the north, has also worsened dramatically in the past few weeks. Torrential rains have led to major rivers like the Swat, Kabul and Panjkora breaking their banks, sweeping away thousands of homes as well as roads and bridges. Thousands of travellers have been trapped by landslides.

The monsoon brings the danger of flooding every year, but the federal and provincial governments of Pakistan have not formulated any strategy because they do not care about the workers and the urban and rural poor. The floods of 2010 were especially severe yet, 12 years on, no lessons have been learned.

Worse, politicians and capitalists belonging to the administration have illegally built hotels and markets on the banks of the rivers. By creating obstructions in the course of rivers, they make the floods even more destructive and cause greater devastation to the working class and peasantry.

The mass of the people are shaken by despair, anger and hatred of the government and the rich who, once again, have let them down through ignorance and greed. In any number of places, protests have taken place, and more are to come. Socialists and all working class and progressive forces should support them and intervene.

They need to demand immediate and free relief materials for the affected regions, for the towns and countryside. More protests should be organised around demands that all government resources should immediately be made available for relief work, paid for by the capitalists and the rich. Massive taxes should be levied on landlords, exporters and contractors to help the flood victims.

We need a plan to rebuild the destroyed houses and infrastructure, compensate the victims of the floods and implement protective measures, which can prevent a repetition of the catastrophe in the coming years.

Given the failure of the state to organise effective support, the workers, peasants and poor must fight for control of all support programmes. They should form local councils in the towns and in the countryside to ensure that aid is delivered to those in need and that rebuilding of houses and infrastructure is undertaken according to safety requirements and needs of the suffering masses.

Socialists and internationalists in Britain and throughout the world must stand in solidarity with the struggle of the working class and peasantry of Pakistan against their ruling class.

We need to call for the immediate cancellation of all foreign debts ‘owed’ to the ‘our’ imperialists, and demand an urgent programme of aid—reparations—to the working class and peasantry of Pakistan to compensate for the historic contribution to climate change made during the capitalist development of the west.