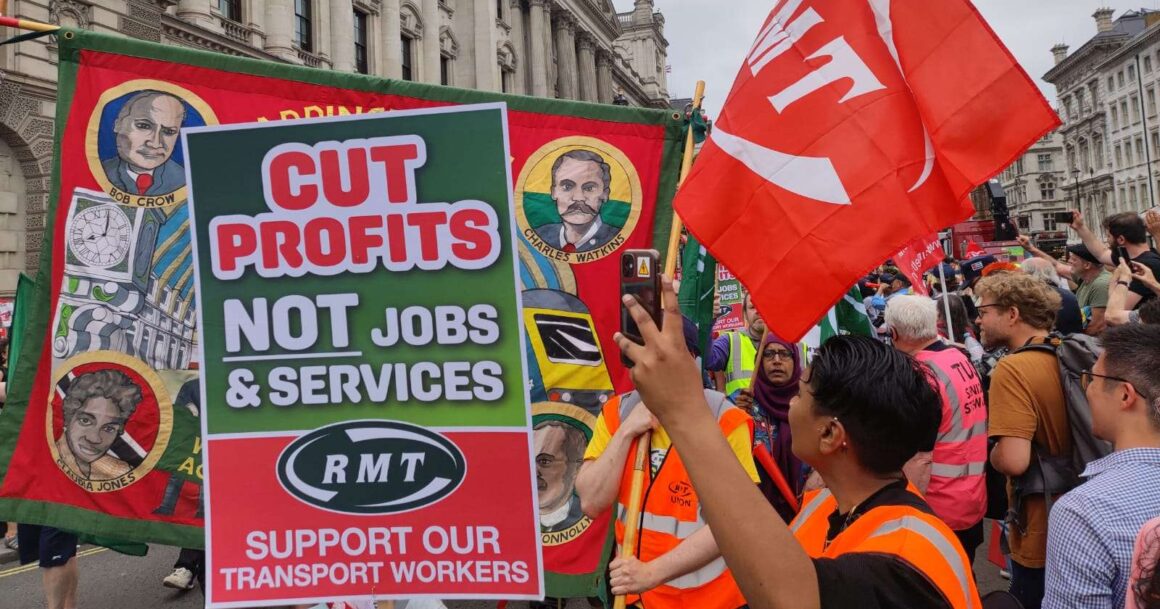 THE 18 JUNE demonstration and RMT strikes have given a real shot in the arm for hundreds of thousands of workers preparing to defend their pay, jobs and conditions in the face of the biggest attack on our living standards in generations.

CWU General Secretary Dave Ward has spearheaded the call for ‘collectivism’, calling on unions to develop a ‘common bargaining agenda to tackle insecure employment’ across each sector to raise wages, conditions and union organisation.

With upcoming strikes across telecoms, post and mail, the CWU is well placed to build this unity more widely across the movement.

Organise
In speeches on 18 June and since, Ward raised demands passed at the CWU’s November 2021 Special Conference for unions to join local campaigns and community groups in common action for a ‘new social settlement for the UK’.

This is an open door for reps, activists and officials to agitate for local councils of action that can bring together delegates from union branches, workplaces, Labour parties, tenants organisations and campaigns to launch a mass movement to say: we won’t pay for their crisis. When union leaders open doors for rank and file militants, we should walk through them.

Ward has voiced other good ideas that should be taken up. He calls for ‘Town Hall meetings’ where trade union branches can build relationships with wider working class organisations like Acorn or the Renters’ Union. He suggests that names can be collected at these meetings so the work can continue.

While he says he is ‘not ruling out a general strike’ he is in favour of ‘building the next stage of the action’. He has suggested stunts that all workers, in whatever union or none, can join in, for example walking out of their workplace for 10 minutes on the same day in October in protest at the second energy cap rise.

Taken together, he calls this strategy ‘building collectivism’.

Councils of action
Of course none of this means Dave Ward has suddenly become a revolutionary firebrand. He remains a bureaucrat, albeit on the left of the TUC. But he is under pressure from the rank and file on the one hand and intransigent bosses on the other. He feels the need to mobilise his members, if only to be seen to be doing something.

Socialists need to relate to this situation by taking what is positive in the CWU’s strategy and running with it. Local cross-union and social movement organisations—councils of action—could lay the basis for building solidarity with strikes, coordinating them and raising their horizons. They could steel trade unionists to reject rotten compromises and demand pay deals linked to inflation, with a 1% wage rise for every 1% price rise.

Likewise we can raise the demands that the timid TUC does not. Privatisation is ignored as an aim in the current strikes— even by the RMT, which has kept the issue alive in its propaganda. Mass strikes give us the chance to raise the demand for nationalisation, at a time when rail and mail, gas and electricity should clearly be nationalised to turn profits into price freezes and a green revolution.

A united mass action in October is also a good idea, but local action committees should decide what to do. Ten minutes standing outside your workplace is a minimum but many will want to go further: burning their energy bills or staying out for the rest of the day.

In times like these trade union leaders can be forced to mobilise their members or take imaginative initiatives. Socialists need to be ready, neither dismissing them as bureaucratic tricks not worth the paper they’re written on nor gushing uncritically about their merits. In short, if they give an inch, we should take a mile.