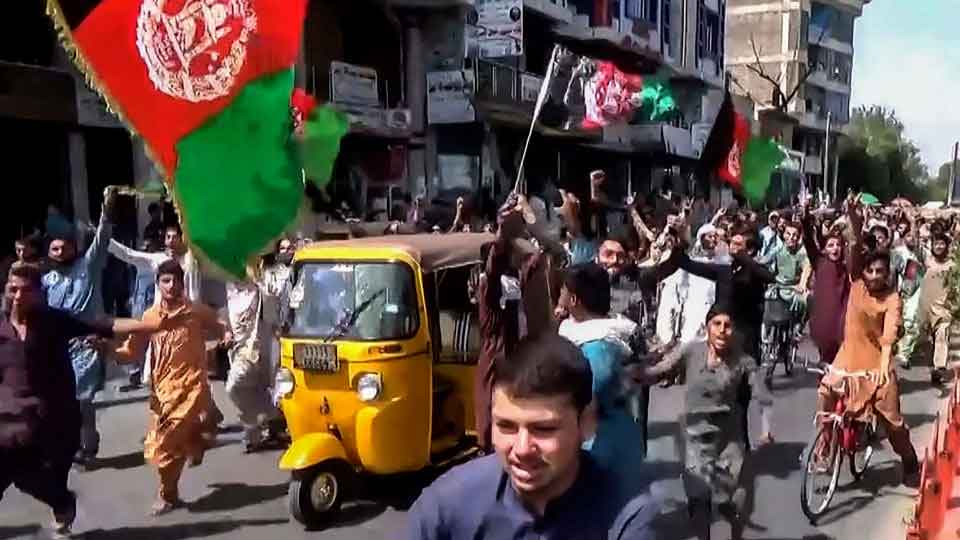 THE REACTION to the Taliban victory has been howls of rage from the Tory and Labour MPs. From the Tories, it has mainly come from those who can’t help but see this as a straightforward military defeat.

They realise how difficult it is to justify the 457 lives lost in the war. As they said, how can we tell the mothers of those killed it was worthwhile? Simply you cannot—you lied to them then and you are lying to them now.

From the Labour benches it was the Blairites, many of whom were complicit in taking the country to war 20 years ago, who were most vocal in their indignation at the US pullout. In agitating for war at the 2001 Labour Conference, Tony Blair said: ‘This cause is just. We have to act, for humanitarian reasons, to alleviate the appalling suffering of the Afghan people’. Shadow Foreign Secretary Lisa Nandy, praising the ‘good work’ of the occupying British troops, could not have put it better.

In his speech to the House of Commons, which could have been written by Blair himself, Keir Starmer criticised Johnson and Biden for a precipitate withdrawal, repeating Blair’s claim that Britain has a humanitarian and democracy building mission in the countries it has invaded and bombed.

In a late night statement posted on his website, Blair described the US withdrawal from Afghanistan as “tragic, dangerous, and unnecessary”, before launching into a ferocious Islamophobic rant:

‘We didn’t need to do it. We chose to do it. We did it in obedience to an imbecilic political slogan about ending “the forever wars” . . . The 9/11 attack exploded into our consciousness because of its severity and horror. But the motivation for such an atrocity arose from an ideology many years in development. I will call it “Radical Islam” for want of a better term. As a research paper shortly to be published by my Institute shows, this ideology in different forms, and with varying degrees of extremism, has been almost 100 years in gestation . . . Islamism is a long-term structural challenge because it is an ideology utterly inconsistent with modern societies based on tolerance and secular government. Yet Western policymakers can’t even agree to call it “Radical Islam”. We prefer to identify it as a set of disconnected challenges, each to be dealt with separately. If we did define it as a strategic challenge, and saw it in whole and not as parts, we would never have taken the decision to pull out of Afghanistan.’

In making this statement, Blair seeks to play on anti-Muslim fear, in much the same way as he did when justifying the invasions of Iraq and Afghanistan. He is attempting to scapegoat the oppressed people of countries such as these without recognising the role that Western imperialism has played in the creation of what he terms ‘radical Islam’.

Let us not forget that it was the US and UK governments which first armed the Taliban in the 1980s in order to destabilise Soviet supremacy in the region, and it is the western capitalists’ scramble for oil and territory of ‘strategic importance’ which has led to the death and devastation visited on these nations. This violence, far from being the solution to the problem of Islamic radicalism, only serves to further harden the populations in their anti-western attitudes and push them to seek extreme solutions, such as those offered by the Islamic fundementalist ideology.

The invasion was opposed by powerful anti-war movements around the world, which predicted the disastrous consequences of the “good” wars in the Balkans and West Africa. Blair’s words on the eve of the invasion were bound to lose all credibility as the casualties mounted and the new democratic Afghanistan failed to materialise.

At its peak, the anti-war movement against the interventions in Afghanistan and Iraq in 2001 and 2003 mobilised millions on the streets around the world against the Nato invasionS and occupations. This pitted us against Tony Blair and the Labour Party which has a full share of the responsibility for the 20 years of carnage. It saw 80,000 on the streets of London in November 2001 and two million on 15 February 2003. But the Stop the War Coalition leaders held back from calling for mass direct action to stop the war.

The fact is that the war was a disaster both for those who waged it and even more so the civilian population that suffered it. Since 2001, more than 775,000 American and over 157,000 British service personnel have been deployed in Afghanistan. 2,448 US soldiers, plus 3,846 ‘contractors’ (i.e. mercenaries) were killed in action, as well as 454 British soldiers. A similar number from other Nato member states were killed. Overall, the war has cost the USA $2.26 trillion and Britain £39 billion.

But the sufferings of Afghans have been far worse. According to official figures more than 71,000 civilians and over 70,000 Afghan soldiers have died plus an estimated 51,000 Taliban fighters, and these figures could well be a serious underestimate.

The highpoint of US and Nato engagement was between 2010 and 2012 under Obama, who was elected on a promise to end the war but then increased the pace of military operations, accompanied by massive “smart” drone bombing in both Afghanistan and Pakistan, with consequent civilian casualties. This, just like Bush’s efforts, failed to quell the Taliban, in part because they had the not so secret support of elements of the Pakistan security forces, facts revealed by documents released by Wikileaks and for which Julian Assange is languishing in a British jail.

Under Obama, Trump and Biden, these fruitless expenditures, human and material, plainly convinced the permanent US military and political elite that involvement in Afghanistan was futile, and no longer of great geostrategic significance as compared with their growing obsession with China in the Pacific Rim—the so-called ‘Pivot to Asia’.

This view may soon prove shortsighted. Afghanistan could be a valuable link in Xi Jinping’s Belt and Road project at least as a hinterland for their prime object of interest, Pakistan. The Chinese have for some time been negotiating on this with both the Afghan government and the Taliban. It would play a role in broadening the $62bn China-Pakistan Economic Corridor, CPEC. Although the continued oppression of the Uyghurs could prove an obstacle, China is already a player in the latest iteration of the Great Game.

Pakistan’s Inter Service Intelligence agency (ISI) is widely known to have played a major role in creating not only the Mujahidin, who fought the Soviets in Afghanistan in the 1980s, but also looked with favour on the rise of the Taliban from 1994-97. Even after 2000, it has supported them behind the scenes and tolerated their centre in Quetta, Pakistan. Now, the government and army see Taliban rule in Afghanistan as providing strategic depth against its great rival, India.

A war of liberation?

The Western backed governments have re-opened and expanded education for women, and liberation movements as well as students’ and workers’ organisations have developed in the country. However once again, as in previous periods of Afghan modernisation, all of this rested on foreign domination and could not strike deep roots in the majority, i.e. the rural population.

Without transforming rural life and bringing a direct democracy for all who labour, in the homes, fields and factories, all progress will remain vulnerable to a social and political regression. Revolution from above always rests on the weakest of foundations.

For centuries, the intervening powers—the British Raj, the Soviet Union, the United States and tomorrow, perhaps, China—came for their own geostrategic reasons, not out of any sort of selfless promotion of modernisation, democracy or women’s liberation. It is only when the country’s intelligentsia, workers and rural poor take control of their fate with a revolutionary party that the cycle of externally imposed corrupt regimes, reactionary terrorist insurgencies and tribal warlords can be broken.

In a period of sharpening rivalry between imperialist and regional powers, clashes in ‘faraway places’ may seem to be of no obvious concern to the labour movements of the older imperialist powers, except perhaps when floods of refugees approach their borders. In fact, they affect the vital interests of the international working class. The hasty withdrawal of the western powers will be accompanied by attempts to erase their responsibility for the new atrocities that a civil war and Taliban restoration will inflict.

Besides, many of the older imperialisms already have substantial communities of workers and refugees, drawn from countries which their rulers once invaded or occupied and who could play an important role in building an international labour movement in solidarity with progressive forces in their homelands. In short, they can be an important part of a new, a fifth, International; one that can help prevent the workers of the imperialist countries, too, being dragged into further wars of unimaginable destruction.

In the countries that inflicted the long war on Afghanistan, first and foremost the Nato imperialist states, the international workers’ movement must press for:

Last, but not least, the left in the imperialist states need to keep the closest eye on ‘our own’ imperialists. Smarting from their humiliation in Afghanistan, they are nevertheless preparing another full conflict with the “new” imperialisms and their regional allies. We must do everything in our power to resist these fresh aggressions.