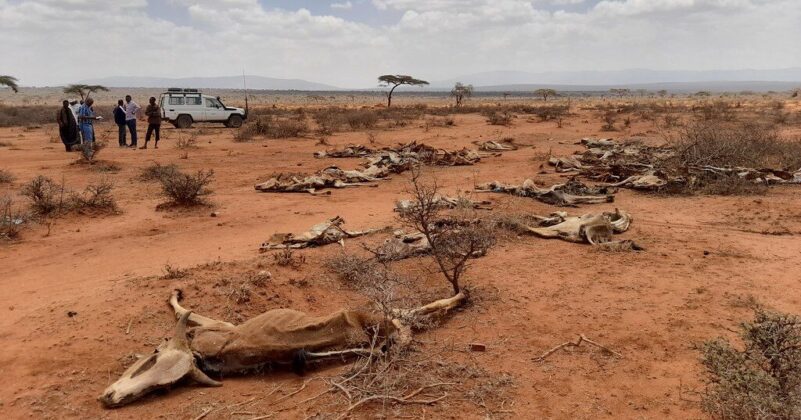 Somalia, as well as parts of Ethiopia and northern Kenya, is once again facing severe famine because of extreme and worsening drought in the Horn of Africa. It is already the longest famine in 40 years, resulting from three consecutive failures of the rainy season.

According to the World Meteorological Organisation (WMO), there is a high chance of drier than average conditions continuing across eastern Africa. On top of the drought, there is the issue of escalating price hikes for the basic necessities of life. According to the African Development Bank, annual food inflation on the continent stands at 40%.

Subsistence farmers and pastoralists have seen over three million of their animals die, and have been forced to flee to makeshift displaced persons’ camps consisting of flimsy tents and few facilities. More than 755,000 people have been internally displaced since the drought began in January 2021, according to figures released by the United Nations Refugee Agency (UNHCR).

Agriculture accounts for up to 60% of Somalia’s GDP, 80% of its employment, and 90% of its exports. The country and its already impoverished people face absolute ruin. According to the World Food Programme, at least 7.1 million people (out of a total population of 16 million) already face acute food insecurity. By May this year 1.5 million children were experiencing malnutrition and the figure is undoubtedly much higher now after the scorching summer months. Famine has been declared in certain regions but aid organisations are pleading for donor states not to hang back until a declaration for the whole country occurs.

The UN Food Aid Organisation is seeking supplies for 882,000 people which will cost $131.4 million. But as of 4 August this was only 46% funded. Compare this with the billions the USA and its Nato allies have been spending on their huge re-armament programmes since Russia’s invasion of Ukraine.

The situation in the Horn of Africa has been made worse by the interruption of grain supplies by Putin’s occupation of southern Ukraine and the blocking of its ports. The first ship, sailing under a United Nations flag, has only just arrived in Djibouti with 23,000 tonnes of Ukrainian wheat, but that is destined for Ethiopia where the Tigrayan war has created a man-made famine. Much more will be needed.

In 2011, a quarter of a million people in Somalia—half of them children—perished in a famine that followed a similar three-year failure of the rains. Less than half the aid that donor countries pledged to the humanitarian response was actually handed over. Another famine occurred in 2017.

Worldwide, the UN says that over the past few years the number of people ‘marching to starvation’ around the world has increased from 80 million to 323 million, with 49 million people in 43 countries at risk of famine.

This increase in famines is clearly a result of climate change. Famines already affect a huge swathe of countries from the Sahel, the dry grasslands south of the Sahara Dessert, extending right across to the Horn of Africa, from Sudan in the north to Kenya in the south. The desertification of the region has social and political consequences, provoking murderous rivalry between nomads, pastoralists and farmers for scare land resources. Rebel groups and state forces are clashing throughout the continent.

Interventions by imperialist nations like the French and the British, aided by United Nations and German ‘peacekeepers’, have usually made the situation worse. Bloody civil wars between and within Sudan and South Sudan, and most recently between Ethiopia and Tigray, all add to the misery of the people.

It is significant that this terrible situation in Africa is occurring at the same time as the appalling suffering caused by flooding in Pakistan. Extreme weather events are also underway in North America, Europe, and China. No even moderately informed person can now seriously deny the extreme climate catastrophe we are facing and its manifestations—droughts, floods, wildfires, and famines.

Yet despite the grandiose targets adopted at the Paris and Glasgow climate conferences, no serious measures were taken to realise them by the richer countries and no resources allocated to the countries impacted by these extreme weather events. Indeed, they are even returning to fossil fuels in the wake of the Ukraine war and the Nato sanctions.

The emerging famine in the countries of the Horn of Africa highlights the fact, long predicted by activists, that it is people living in the global south who will be the first victims of the environmental catastrophe: those who have, historically, the least responsibility for the emission of greenhouse gases by industrialisation, the burning of fossil fuels, and the destruction of the environment more generally.

Today, it is clear that Somalia needs a massive immediate supply of food, as well as accommodation for the many displaced people, which the rich imperialist powers can well afford to give. However, this will only be sticking plaster on a gaping wound if it is not followed up by the cancellation of all foreign debts, expropriation of imperialist property for the benefit of the nations that have been exploited for centuries, a massive programme of social spending on schools and universities, hospitals, infrastructure of all sorts, and, vitally, measures to halt and reverse the degradation of the environment.

This is the reparation that Africa deserves, but it will never come from those who robbed the continent and still do so. The working classes of Europe and North America need to inscribe righting this historic wrong in the programme of their struggle for power, so that they can implement an internationalist policy in collaboration with the proletariat and small farmers of the global south.