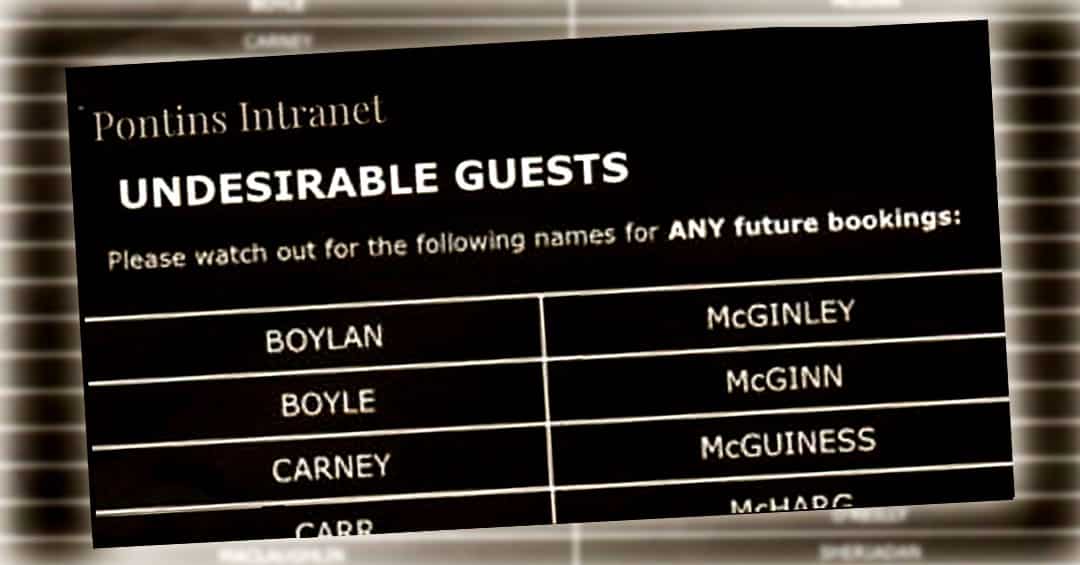 The holiday parks operator Pontins has been publicly exposed and humiliated for its anti Irish and anti Traveller racism. The firm, owned by Britannia Hotels, has been circulating a list of forty prohibited Irish surnames on its intranet instructing booking operators not to book accommodation for such ‘undesirable guests’.

Pontins’ shameful policy was uncovered by a whistleblower who alerted the Equality and Human Rights Commission (EHRC). The EHRC also revealed that the firm had been monitoring calls within its contact centre, it had refused bookings by people with Irish accents or surnames and was using its commercial vehicles policy to exclude Gypsies and Travellers from its holiday parks. Sarah Mann from the Friends, Families and Travellers charity reports that ‘We know from our helpline that they are not the only holiday camp who have these practices’.

The list was composed of some very common Irish surnames which of course are widespread in Ireland and throughout Britain. It harked back to the systematic anti Irish discrimination of the 1950’s when immigrants were faced with ‘No Irish, No Coloured, No Dogs’ notices when seeking lodgings. Martin ‘Beanz’ Ward, comedian, podcast presenter and Irish Traveller, said of the Pontins case, ‘it’s common, it’s widespread’ and correctly called out the consequences, ‘If you’re blanket banning based on a name and an accent, then that’s filtering into Irish people as well’.

The outcry against Pontins has succeeded in compelling the firm to sign a legal agreement with the EHRC to prevent racial discrimination. The EHRC confirms that the practices constituted direct discrimination on the basis of race and breached the Equality Act 2010. It will now monitor Pontins’ attempts to fully investigate and implement an equality, diversity and inclusion agenda.

The roots and persistence of all forms of racism in Britain is directly connected to her colonial history. The need to justify imperialist rule was the backdrop to a supremacist ideology that placed colonial peoples into an inferior category. They were branded as ‘backward’, ‘stupid’ and incapable of self government. Ireland was an early example of this and her long resistance to British rule was often the cue to whip up anti Irish hysteria in this country.

The Travelling community too has suffered historic persecution and includes many people favouring a nomadic lifestyle, not just Irish Gypsies, but also Roma, New Age, Scottish, English and Welsh Gypsies, etc. The amount of discrimination against the Travelling community is deep rooted and widespread despite the Equality Act. They are routinely viewed by settled residents and local councils as not part of the community and consequently not entitled to many of the basic services that facilitate good health and education. Levels of social deprivation are amongst the worst in Britain. Decent plots for settlement are rarely provided despite councils having a duty to provide sufficient land for accommodation.

The Dale Farm eviction of an Irish Traveller community in 2011 was a particularly brutal act of racism. Basildon Tory council spent £18 million and the services of 100 riot police in battering down a site that had been built over ten years on an old scrap yard. Dale Farm was an example of an integrated and successful Traveller community which was broken up and defeated despite the resistance and became a testimony to the persecution of this community as a whole. The site, with no residents now, is being called ‘a £7 million fly tip’ with mountains of rubbish!

The existence of anti Traveller racism should be as unacceptable as all the other forms of prejudice. All forms of racism seek to divide working class people against each other and distracts from a common struggle against our capitalist rulers. The labour movement has a proud history of campaigning against discrimination and defending minorites and it needs to rediscover this commitment to fighting repression and racism as applied to the Traveller community. The attack on one community is an attack on all!