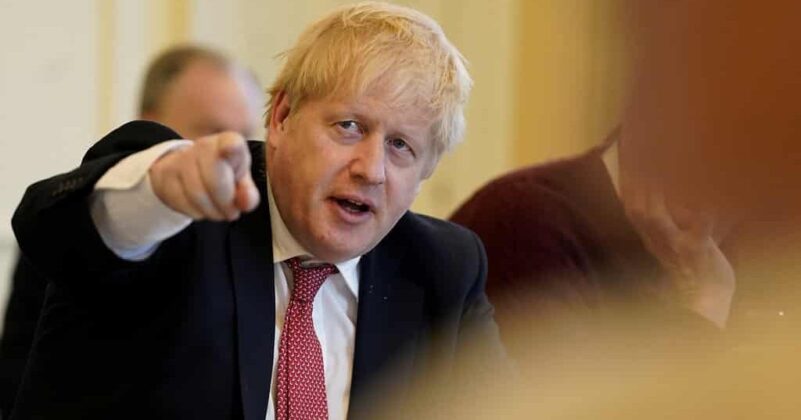 BORIS JOHNSON has resigned as leader of the Conservative Party, but not yet as prime minister. The artful dodger has managed to stay in No.10 Downing Street, drawing his annual salary of £164,080, until 5 September. The 50+ MPs who quit are also all entitled to three months’ salary, costing the taxpayer some £423,000, even though some only held their posts for a few days or weeks.

The Daily Express and the Daily Mail are beside themselves with grief and rage at Boris the Hero of Brexit’s own exit. ‘Thank you, Boris. You gave Britain back its Freedom’ grovels the former; ‘What the Hell have they done?’ screams the other.

Apart from schadenfreude at seeing a third Tory leader in a row take to the lectern outside Number Ten to announce their resignation, there is little in this for the labour movement to celebrate. After the awkward Ed Miliband, after Jeremy Corbyn—sabotaged by the Parliamentary Labour Party—and now with the dull Keir Starmer, there can be little hope of any immediate replacement of Johnson or his successor by ‘one of ours’—at least in the normal course of events.

Sure, it was amusing to watch what one Tory MP described as like a scene from Shakespeare’s Julius Caesar as over 50 Tory ministers plunged their daggers into Johnson’s back. For his part, self-righteous as ever, he not only insisted that he would not resign but that he was planning to stay in office until the 2030s! Even as he announced his resignation, he blamed the Westminster ‘herd’ for stampeding him over the brink—just as they had stampeded him into power over the body of Theresa May, his predecessor.

Of course, there are serious issues beyond the “Partygate” scandals and his lies that he knew nothing of the reputation of his deputy chief whip Chris Pincher as a sexual predator. He was, and remains, a brazen liar who thinks rules and regulations, even the law of the land, do not really apply to him.

The Conservative Party knew his reputation when they chose him as leader. Indeed, as Trump showed in America, his are just the skills needed in a modern demagogue. His comedic skills appealed to the prejudices of the reactionary lower middle class and Tory working class voters who have been part of the party’s electoral base since long before the red wall came tumbling down. They admired his effrontery and open scorn for the stiff and the stuffy conventions of British political life.

Brexit fraud
Johnson’s character as a total charlatan was a recommendation when the task was to ‘get Brexit done,’ without in any way revealing what that would actually mean. Now, as the chickens come home to roost, it is fitting that he departs, leaving someone else to clean up the mess. Meanwhile, Brexit, in terms of stabilising economic relations with the EU or signing any “golden” trade deals with the USA and China, is far from “done”—indeed it may be coming undone.

The only thing that has been ‘done’ is that the UK has left the tariff-free European single market. No trade deal has been done with Brussels or any other major country or economy. There are acute shortages of skilled labour. In attempting to tear up the Northern Ireland Protocol that he himself negotiated, Johnson has stymied trade negotiations with the Biden administration.

Now, with inflation running at nearly twice the level of neighbouring countries, there are promises by all the Tory leadership candidates to cut taxes while boosting arms spending. That will make a nonsense of pledges to invest in the run-down northern cites or to save the NHS. And “levelling up”? That has gone the way of all his other promises. So, of course this government is in crisis.

What the rivals for the Tory leadership, playing to the aged and reactionary party members who will have the final vote between two of them, can all agree on is to force major wage cuts (sub-inflation pay deals) on the workers who they recently applauded as the heroes of Covid. That is why every union should put in a wage claim that fully compensates for the soaring cost of living and builds in a real rise in spending power after 12 years of falling incomes and Tory cuts to the ‘social wage’; health, education, welfare, public transport etc.

Tory future
Meanwhile, the Tory candidates are lining up to offer various shades of Johnson’s policies, which none of them really opposed. These include:

If the new Tory leader is more hard working and efficient than the lazy, self-promoting Johnson, it will be the worse for us.

… unless we stop them
The Labour movement—trade unionists and socialists—needs to immediately hit Johnson and his successor with:

We need to build a mass movement, with roots in every locality, that provides solidarity with every group of workers in struggle. We need local councils of action to coordinate these struggles, building towards mass strike action against every reactionary move and policy (wage freeze, austerity, anti-union laws) launched by the employers and their Tory government.

At the same time, with the Labour Conference coming up, the affiliated trade unions should break with their passive disapproval, and openly call an end to Starmer’s witch-hunting and dumping of polices democratically agreed by Conference between 2016 and 2021. We should use those policies as the launch pad for further developing a real alternative to Johnson’s reactionary successor: not just as policies for a future Labour government but a programme of action that can speed the Tories’ departure by a massive social revolt.