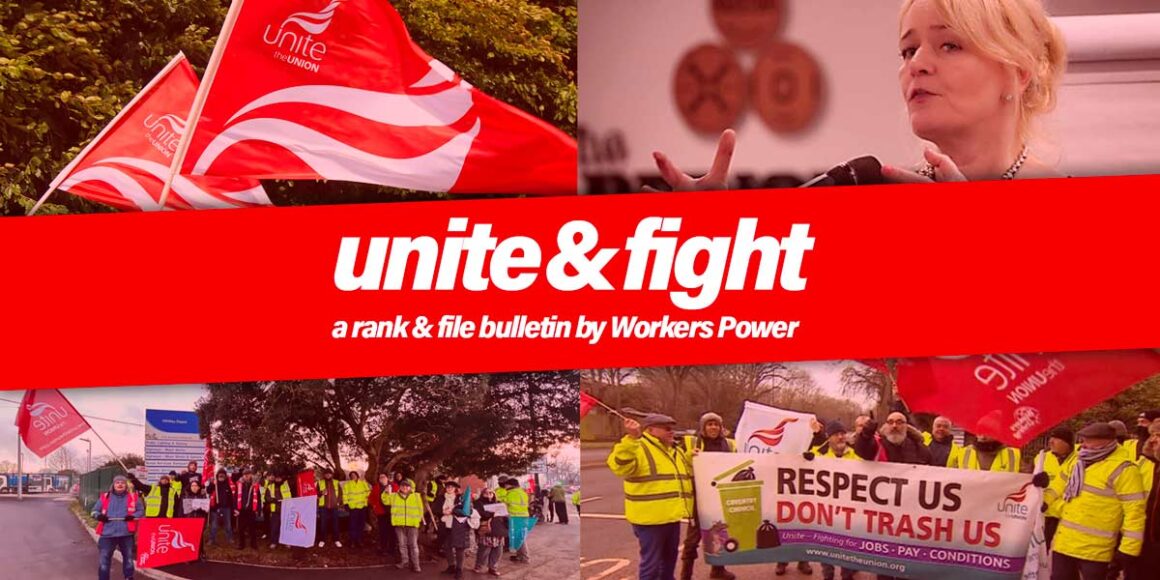 Unite & Fight is a rank & file bulletin written for members of Unite the Union. It was launched by Workers Power supporters in Unite.

With this bulletin we aim to address the current disputes and issues in Unite as well as wider concerns facing the working class from a communist, that is a revolutionary socialist point of view on a monthly and interim basis.

The election of Sharon Graham could prove pivotal in the history of Unite. For the first time an independent left, opposed by United Left, which has up to now been dominant on the left of the union, has been elected General Secretary.

This represents a rejection not only of the right wing but also of the bureaucratic methods of the broad left, United Left. The rash of strikes after the covid lockdowns underline that workers are ready to fight – they have no option.

Many thousands of Unite members, from construction to the buses, from logistics to engineering, are enthusiastic for the changes Graham has promised: to strengthen workplace organisation, to democratise the union and to take on the bosses.

However, Graham is a bureaucrat, part of the apparatus of officials, well-paid and mostly unelected, who see the membership as at best a stage army and the bosses as ‘partners’ with whom they can collaborate. Even the leverage campaigns, successful as many of them are in their limited aims, are a substitute for mass strike action.

We advocate the building of a rank & file movement which can transform Unite root and branch, with the election and recallability of all officials, who are paid the average wage of those they represent, and where all campaigns, strikes and negotiations are under the control of the members involved through elected strike committees.

We fight for the abolition of all the anti-union laws and for all out indefinite strike action as the surest and quickest way to victory. But disputes are too often left in splendid isolation and limited to sectoral, company or workplace demands.

We fight for workers’ control in the workplace: over hiring and firing, over working conditions and health & safety, over production methods and the introduction of new technology.

We fight for solidarity action and linking up of disputes, for generalised strike action so we can attack the real enemy, the capitalist class and its state, police, courts, army, etc.

We are communists. Our goal is the revolutionary overthrow of capitalism by the working class. But we are not sectarian. We support all battles, even where we disagree with the leadership, so long as they take the struggle forward. We want to work in an honest way with all other rank & file forces and to those that agree with us, we ask you to join Workers Power.